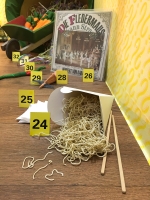 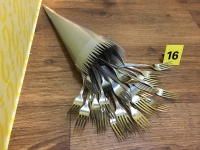 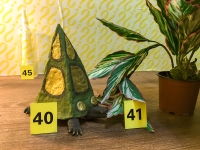 Several months ago, Nina Katchadourian enrolled in the “German Integration” course at Volkshochschule Mitte and, along with her fellow classmates from around the world, began the struggle to master the grammatical complexities of the German language. One of the fundamental challenges is learning how to use the gendered definite articles der, die, and das correctly. To a beginning German student, the world quickly transforms into a landscape of objects with der? die? das? floating above them all on murky clouds.

Motivated by the desire to make something pedagogically useful for her show at die raum, Katchadourian has designed a “grammatical triptych” of sequential scenes. The title of each scene is a word with its corresponding der, die, or das article. Each scene is staged using only objects that share the same article. By later recalling the objects that appeared together in a scene, a viewer can associate the objects in the room with one another and learn the correct articles.

The scenes function in a way similar to the mnemonic device known as the memory palace, a “method of loci,” used by the Greeks and Romans to memorize sets or sequences of information through spatialization. Although the voca­bulary taught to the beginning German speaker is the springboard for Katchadourian’s three scenes, perhaps there will be revelations for the fluent German speaker as well. Do certain kinds of objects fall most often into one of the three categories? Will some objects when seen in each other’s company expose something about the gendered qualities of these words? To what extent does the gendered nature of a word disappear to a native speaker?

parts of the exhibition series: