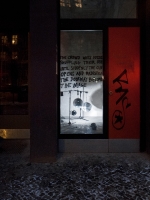 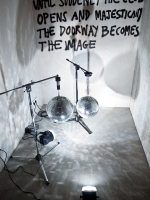 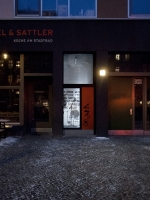 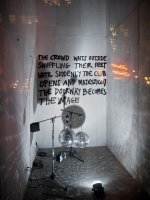 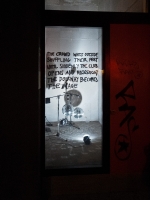 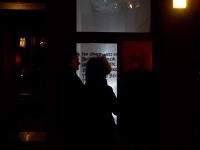 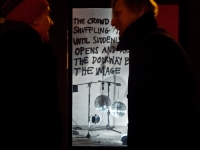 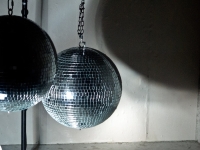 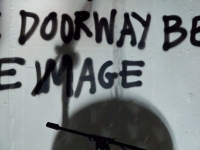 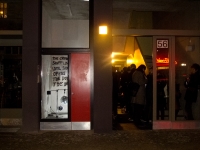 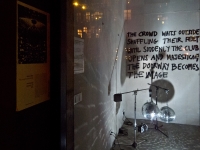 The Crowd Waits Outside presents a sculptural abstraction of a club envi­ron­ment. Dave Allen's installation comprises two mirror balls and strobe spots mounted onto microphone stands. The mirror ball structure works as a mute render­ing of a distorted disco beat. One mirror ball is set to rotate 'the wrong way' and hence 'mirror' the other in more than one manner. The strobe lights are marginally out of sync with one another, flashing at slightly dif­fer­ent rates. The number of beats per minute reference electronic dance music genres such as Dubstep and Grime. The title of the work is the initial phrase of what could be a song text sprayed on the wall, which poetically depicts the act of queu­ing out­side a club.
The installation plays on the notions of waiting and anticipating, but also the po­ten­tial inclusion or exclusion — to be 'in' or 'out'. Although being a part of the queue already counts for being a part of the event one is queuing for. The installation can only be viewed from the outside and offers no entry, which makes the viewer a part of the in­stal­la­tion and doomed to a limbo of in­fi­nite queuing.
With its cool and subtle structural modifications of musical formats and con­stants The Crowd Waits Outside is typical of Dave Allen's conceptual and mini­mal­ist approach. In its hard-core rationality it is above all lyrical.