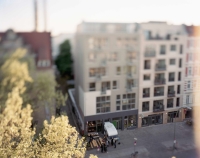 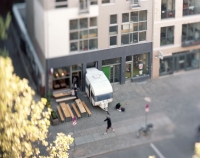 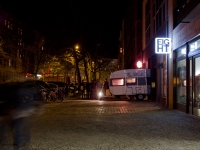 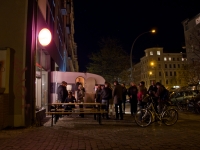 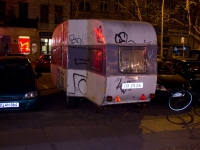 For the installation Adaptation the artist duo Vinyl-Terror & -Horror have creat­ed a parasitic architectural structure that negotiates between private and public space. An old family caravan has been modified to merge with the exhibition space — one half parked inside and the other half occupying the pavement in front. Its middle section shunted upwards the installation mimics the organic modular structure of the building that serves as its host. The improvised and autonomous character of the installation challenges dominant urban aesthetics as well as the physical and mental systems which dictate the use of urban space.
Mobility, autonomy and improvisation are fundamental features in the work of Vinyl-Terror & -Horror, who have toured the roads with a selection of trucks, tents and caravans that serve as living spaces as well as exhibition platforms and concert stages for their noise music sculptures and soundtracks. Their mobile structures interact with and adjust to any given social context while maintaining their autonomous status, and seek to propose alternative uses of private and public space.