Annika Ström’s work evolves around performance. Ström’s performative prac­tice began in 1995 as she invited her mother to make drawings of her. Later her prac­tice was extended to soundtracks, which Ström performed herself.
In recent years Ström has withdrawn her own persona from the actual stage, her soundtracks and “concerts about concerts” are presented by other per­formers. The latest performances take temporary conditions of everyday life as a starting point, and personal traumas are acted out by strangers. Mo­mentary conditions of life — like em­bar­rass­ment or frustration — are turned into per­ma­nent states of awk­ward­ness, which inevitably spill over to the immediate surroundings, trans­ferring a heavy feeling of uneasiness to the audience, as in Ten Embarrassed Men, 2010. This performance featured ten actors walking around in a group acting em­bar­rassed at an art fair. Not all performances are announced as such, but exploit the element of surprise — as for instance the scripted narrative of a man at an opening acting upset on the phone with his partner in The Upset Man, 2010. As such Ström's performances convey poetic moments of fiction, which blend in with the reality they seek to portray.
For her live performance at die raum Ström has commissioned seven women to perform the task of being self-assured and constantly “in the way” for the duration of the opening. 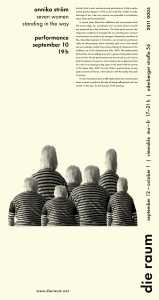 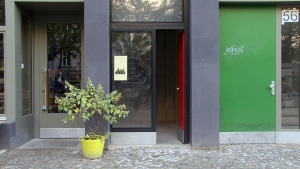 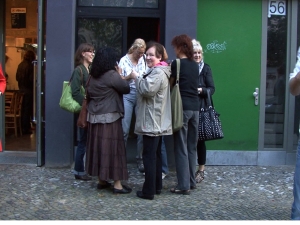