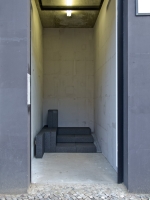 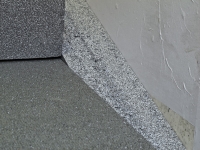 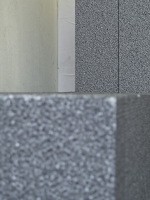 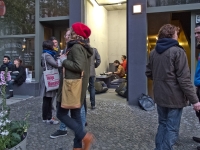 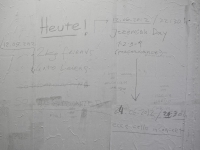 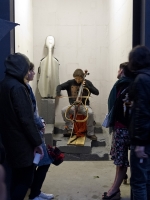 Prosthesis 9t is part of an ongoing body of work titled Spacial Prosthetics, which seek to create a physical as well as symbolic extension of architectural spaces. For his installation in die raum Mario Asef has “expropriated” insulation boards from a local building site. The polystyrene slabs are then used to construct improvised seating, which transforms the exhibition space into a 24 hour social meeting point. Removing the facade completely the in­stal­lation underlines the ambiguous position of the space as something in be­tween the public and the private.
Apart from its functional and social aspects the structure also mimics ar­chi­tec­tural inconsistencies and transformations, such as a staircase leading up to a door, which was then later bricked up. As such the in­stal­lation points to die raum as another remnant space, which — judged by it's unusual pro­por­tions — could have been an ar­chi­tectural miscalculation.
Prosthesis 9t represents an organic cycle of shifts in function and symbolic value, which goes beyond die raum in time and space. The polystyrene slabs — originally intended for a fixed position as insulation of a house — will de­te­ri­o­rate during the exhibition period, and continue the cycle “reinserted” into public space after the end of the show.

Opening event:
For the opening of the show on Saturday May 12th there will be live electro­acoustic music with 2kg friends and Gato Leiras + gin and tonic.