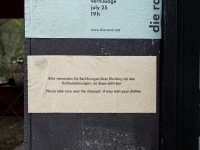 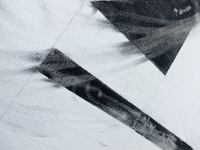 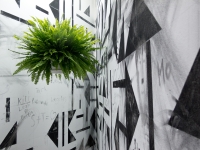 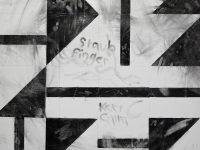 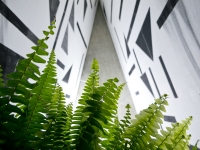 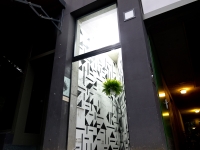 Restoration is part of Laercio Redondo’s ongoing project Lembrança de Brasília that focuses on modernist architectural ­utopias and the work of Athos Bulcão, best known for his tile designs for the Brazilian capital, however less well known for his democratic
methods of involving the construction workers in the creative ­process. Bulcão’s unique patterns function as open systems allowing for individual decision making and playful irregularities.
The installation for die raum cuts the space diagonally in half, transforming it into a three-dimensional rendering of one of Bulcão’s tile designs, which is also represented in the form of a charcoal wall painting. The use of charcoal references the initial outlining process of handmade Portuguese “Azulejo” tiles, but the ephemeral character of this medium also points to the passing of time, and the fragile state of ideologies and “faded” value systems.
Reflective of Redondo’s general interest in and examination of Brazilian modernism and the ideologies behind it, Restoration is an attempt to restore the view of a vanguard creative, one who understood the importance of public art and processes of participation. Targeting the special character of die raum as a space which lingers between public and private, Redondo’s installation invites a discussion of present day value systems, and ideas of a union between art and life.


Credits:
This project was made in collaboration with architect Birger Lipinski.