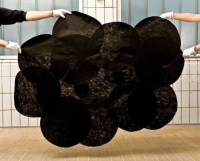 A Darkness Machine does what it promises — it produces darkness. If you leave it on a green lawn to do its job it will kill every living plant beneath it and leave a cloud shaped patch of naked soil imprinted on the ground like a sun print. Life stopped and naked skin. The darkness produced by a Darkness Ma­chine is the kind of darkness that attracts us and scares us at the same time — somewhere between radical openness and no change whatsoever (sex and death). They take us to a place on the borderline between submission and per­dition, where the system of the visible and understandable no longer rules.
For the exhibition at die raum the Darkness Machines are dormant and nicely folded. Two guards — one on the street outside and the other one inside the space of die raum — are watching over the Darkness Machines and making sure that they stay dormant.
To even get started to write this text I had to trick myself: How could I write about something which in its core is unrepresentable? The trick was to think of the text as a woodcut or a lino cut — a graphic image in only black and white. Just like text is often black letters on white paper. Try to imagine the kind of in­for­mation you get from a woodcut and then read this text through that. It is not be­tween the black and the white that sense is made. It happens somewhere else — I am not sure where.